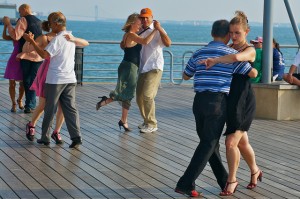 As I pointed out in an earlier set of Flickr album (shown here, I do not dance the tango, and I know little or nothing about its history, its folklore, or even its steps and rhythms. I’m vaguely aware that it originated in Argentina (and Uruguay) in the 1890s, that a new style known as "tango nuevo" began to emerge in the late 1990s, and that various actors and actresses — including Jessica Biel, Colin Firth, Antonio Banderas, Madonna, Richard Gere, Jennifer Lopez, Jamie Lee Curtis, and Arnold Schwarzenegger(!), among others — have performed the tango in various movies. But beyond that, it never really occurred to me that it played any significant role here in the U.S.

That is, not until the summer of 2009, when I happened to return to my hotel, on a business trip to Washington, DC, just as a local gathering of tango aficionados was dancing to their music in a nearby square known as Freedom Plaza. I photographed the event (see my Flickr set Last tango in Washington) and learned from one of the participants that there were similar informal events in New York City, at the South Street seaport, during the summer and fall weekends. When I got back to New York, I searched on the Internet, and found a schedule of upcoming tango events just as my Washington acquaintance had indicated; but travel schedules, inclement weather, and other distractions prevented me from actually attending any of them; by the end of the autumn season, I had forgotten all about it.

For some reason, something reminded me of the tango again this spring — perhaps some music that I overheard, perhaps a scene on some otherwise forgettable television show. In any case, I searched again on the Internet, and discovered that a tango "event" would be taking place on a Sunday afternoon — but not at the South Street Seaport (on the east side of Manhattan, near the Brooklyn and Manhattan Bridges), but rather at Pier 45, where Christopher Street runs into the Hudson River in Greenwich Village. The event takes place every Sunday, usually from 4-8 PM, and I made my first visit in mid-April, which led to this set of photos.

I decided to come back again in mid-July, even though I knew it would be much hotter … and indeed, it was so hot that the music did not even begin until 6 PM. But then the dancers began to appear, one couple after another, until there were a couple dozen couples filling a large space under a sheltering canopy. And since it was the end of a hot summer evening, tango wasn’t the only thing going on: there were people sunbathing, watching the boats on the river, playing frisbee, or simply enjoying themselves. I photographed a little of everything; you can focus your attention on whatever you’d like…

If you’d like to watch NYC tango dancing on your own, check out Richard Lipkin’s Guide to Argentine Tango in New York City.