You are here: Home / Archives for Administrative

Hi Everyone, In an effort to have better edited audio and better checked show notes, we’re going to be moving the day we release the audio to the public back by one day. Previously it was Monday/Tuesday (depending on your location) and now it will be Tuesday/Wednesday. Just think of it as “daylight savings time” […]

Hey Folks, We’ve been having some reports of malware on TheAmpHour.com for the past few days. We have been trying to clean it up as it pops up, but it seems there is a much more pervasive issue which we’re having some experts look into. In the mean time, if this post morphs into a […]

Much like daylight savings time changes which can throw schedules into mayhem, Dave and Chris’s schedules also can change. And in fact, they have! So for the foreseeable future, we’ll be posting episodes between Mondays and Tuesdays, a day later than usual. Sorry if that leaves a hole in your Monday morning commute. Hopefully your […]

This past week on Thursday, our server had an unwelcome guest. He decided it would be fun to send out emails about C1al1s and such from our server. As such, we had it shut down while we took care of it. Due to circumstances beyond our control (until we really started yelling) it was quite unfortunate […]

We’ve seen a significant drop off in the commenting and usage of TheAmpHour.com. Not so much so that we’re worried about the site being broken, as much we are worried about offering a sub-par experience. So, if you have any feedback on any or all of the points below, please leave them in the comments. […]

Philip Freidin was an architect of RISC (AM29000) and Bit-Slice (AM2900/29300) while at AMD. Later, while at Xilinx, he architected FPGAs such as the XC4000, Virtex, Virtex2, Virtex4 and the Spartan. He also has various patents, including for synchronous dual port RAM on an FPGA and for a programming standard that was the precursor to JTAG. Now […]

As you all hopefully have heard by now, we launched the “Discuss” section of The Amp Hour this past weekend. Though it may be an unfamiliar format, we’re really hoping that listeners will take the time to stop by that part of our site. We think it could be a great way for everyone to […]

Thanks to all of our wonderful donors, we’ve been able to upgrade some of our web server equipment and begin offering more services in the near future. As such, we just switched over from our old server to the new one.     Congrats! You’ve arrived at our new server! Let us know how it’s […]

We’ve been on a pretty decent schedule recently about posting by Sunday night/early Monday morning. However, this evening we had some technical difficulties in the audio; as a result, we are going to take some more time to fix up the audio and the show will be up by Monday evening. We had Tom LeMense […] 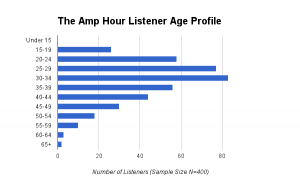